Science of Prediction: The Simple Mathematics of City Development

What will the city become within 30-50 years? A science fiction „techno-city” with intelligent systems taking care of everything, or a dystopic slum where we need to fight for survival? Or, maybe, it will not differ that much of today’s cities? 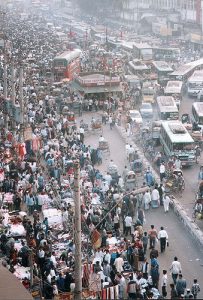 More and more of us live in urban areas, over half of the population on Earth already, and, as predicted, this proportion will go up to 70% within 30 years. Our cities are growing fast, we already have almost 40 megacities (>10 million inhabitants). When we think of this, we realize that we may well become personally affected in the matter soon. Research results on city development, sustainability and livability of densely populated urban environments become more and more interesting to all.

Does One Plus One Make Two?

Where will this fast growth of the population lead? What does it mean for a city when more and more people use its infrastructures and facilities, its systems serve larger and larger crowds? What if the number of inhabitants is doubled? Will production and consumption also double? Do we need twice as many services, habitation facilities? Will unemployment, crime, time spent in traffic jams be two times more? Or, are there completely different relations between quantities? Should we pay more attention to the quality of developments than to the quantity of these?

We need to see what, how and in what measure to develop to meet the increased needs. For answers, processes need to be observed, measured and analyzed to reveal the laws ruling these changes.

The Laws of Scaling

In creating a scientific model of cities, theoretical physicist Geoffrey West researches general mathematical laws that describe processes of the city. We can read about his results in his article presenting the scientific work within the “scaling program” of Santa Fe Institute. His main subject is the applicability of allometric scaling laws to socioeconomic systems: cities, companies, even global sustainability. A starting point was the ¾ power law of Kleiber for metabolic rate, stating that for most animals, the quantity of calories needed to sustain their vital functions scales to the ¾ power of the body mass. As an example, if the mass of an animal is twice the mass of another (or the animal grows to its double), the intake will not double, metabolic rate will increase only with ~75%.

The research team presumed that changes of the complex system of a city can be described through relatively simple scaling laws, just like in the case of biological systems. Analysis results confirmed these presumptions, although there are some essential differences as well. Infrastructure need (e.g. length of the road network, utility network, number of tank stations etc.), scales in a sublinear way, slower than the growth of the population – “savings”, however, are of 15% only, compared to the 25% experienced in biological processes. Unlike biological processes, the city has superlinear growth as well: the quantities related to human behavior and interaction – e.g. wages, number of patents, AIDS cases, violent crime etc. – will grow faster than the population with 15%. Simply put, we can save 15% on infrastructure development, but human related phenomena will “get loose” 15% more than would be expected, which means in negative cases that the systems of the city (healthcare, social care, police etc.) will be charged more. Positive effects however (creativity, productivity, income per capita etc.) will also thrive more and more, which could be see as a scientific explanation to the attractiveness of cities.

Data in the Service of the City

This theoretical background helps us understand the complex processes of the city, predict the course of these, indicate problems to be expected, and model the effect of interventions and development.

Practical utilization though requires data – lots of information describing the city and its processes. The good news is, that as time passes, we can rely on more and more data. Large-scale data related to various areas of city life are continuously accumulating in several sources. All we need to do is apply the right data processing and analysis tools in a smart way and put all these data in the service of the city.

In our blog, we present GIS novelties, topics we are interested in: mapping, location data and services, applications of GIS in intelligent transportation and technologies of the future city.

Read about our new worldwide map on our blog